View source
watch 01:36
We're Getting Mutants in the MCU - The Loop
Do you like this video?
Play Sound

Much like the previous Super Smash Bros. game, this game includes several items which can randomly appear during matches, some of which are taken from other Nintendo games. Super Smash Bros. Melee is the only game in which the Flipper appears, which is directly based on the Propellers from Vs. Balloon Fight and Balloon Fight on the NES. Once it falls onto the stage, any player can pick it up and throw it. Once it's thrown, it will then lock into place in mid-air and become a hazard which bounces away any player which touches it. Much like in the original games, it will be completely still at first, but will begin to spin rapidly once touched. This item was effectively a replacement for the Bumper item from the first game, although every future entry returned to including a Bumper item instead.

One of the features introduced in this entry were trophies, which the player could unlock by playing various modes. Each trophy is a 3D model of a character or object which the player could freely rotate alongside a description and a note of the trophy's origin. Two Balloon Fight related trophies are available, being one of the Balloon Fighter and one of the Flipper as it appears in-game. Neither of the trophies returned in future entries, and this is the only game in the series with any form of Balloon Fight trophy.

This game also has the first instance of Balloon Fight music appearing in this series. There is one song simply titled "Balloon Fight" which is simply the Balloon Trip/Bonus Stage theme exactly as it sounded on the NES version of Balloon Fight. The song can sometimes be heard on the Icicle Mountain stage either during a normal match or in the Adventure Mode, or sometimes as the Ice Climbers' credits theme. This exact version of the song has not returned in any of the following games.

Made famous as an unpredictable obstacle in Balloon Fight, the Flipper stops and hangs in midair when thrown. Any character who comes in contact with the bumper-balls on its ends will be knocked away as the Flipper spins wildly. Flippers can be a bit irksome: in Balloon Fight they caused accidents to friends and foes alike.

The goal in Balloon Fight is to break your enemy's two balloons, depriving him of his flotation devices. If you lose one balloon, your buoyancy drops and it becomes harder to rise. As you can pop both friends' and enemies' balloons, you have to stay alert in this two-player fun fest. The balloonist's name is unknown. 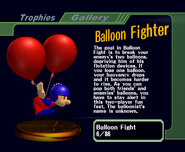 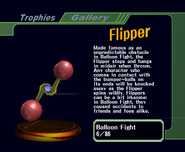