3DS
Nintendo Badge Arcade is a free-to-play 3DS game where players can catch badges to place on the system's home menu. A variety of badges were available based on artwork from other games. Originally after the game's release, badges would be added periodically. 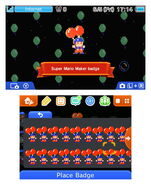 Example of the badge on the home menu.

The sprite which the badge is based on.
Community content is available under CC-BY-SA unless otherwise noted.
Advertisement