Kuufuku Hikou (空腹飛行) meaning "Hunger Flight" is the name of a minigame inspired by Balloon Trip in Chee-Chai Alien. Chee-Chai Alien is a Game Boy Color exclusive title (which due to its necessary use of the infrared port is disabled on a Game Boy Advance), which was the conception of Hirokazu Tanaka, the composer of the original Balloon Fight games, and may be a direct reference.

Instead of a Balloon Fighter, a species of Chalien known as a "Denny" is the protagonist.

The minigame plays similar to Balloon Trip, with similar floating mechanics (however Denny uses their ears to fly instead of Balloons). Kuufuku Hikou begins with several lives, shown using smaller icons of Denny at the bottom-left corner of the screen on a HUD (no Denny counts as one last try). Taking the place of Sparks are 'Comets', which are scattered across the screen or sometimes found placed in horizontal rows at the top and bottom of the screen. Some Comets are larger than others. If Denny hits a Comet, they will fall down and lose a life.

A key difference to Balloon Trip is the 'hunger' mechanic in which there is a health gauge which depletes if Denny doesn't eat any food. The health gauge can be restored by touching food related objects which fly through space, including an egg and an unidentified object (possibly based on sushi/seafood wrapped with rice and seaweed).

Like Balloon Trip it is possible to acquire points and a highscore.

Kuufuku Hikou is unlocked after receiving a Denny (known in Japanese Chalien Series games as チドリ/Chidori) and making it happy enough to unlock its "memory", which allows the player to play Kuufuku Hikou.

Denny is a feminine yellow rabbit character, who after the release of Nonono Puzzle Chalien for Game Boy Advance may be considered a Nintendo character, as the rights to the second game and third game Spin Six (in which Denny also appears in a cameo with many other Chaliens) are owned by both Creatures Inc. and Nintendo. The staff credits of Chee-Chai Alien (original game) reveal that Hiroshi Igarashi, Toshinobu Matsumiya were responsible for the creation of the Chaliens, with Toshinao Aoki as an illustrator, so it is possible that these staff created Denny.

Given their male sounding English name stereotypically contrasting with their feminine look, their gender is also ambiguous. Denny is described in-game as "lazy". Denny seem to love the smell of chocolate, as the vial attracting Denny is the "Chocolate Pheromone" and the character Li'l Blue (Japanese: アオチャン, Aochan); another gender ambiguous character, is attracted to Denny. In the Petit Galaxy; the home of the Chaliens, Denny can be found on Planet Holiday. 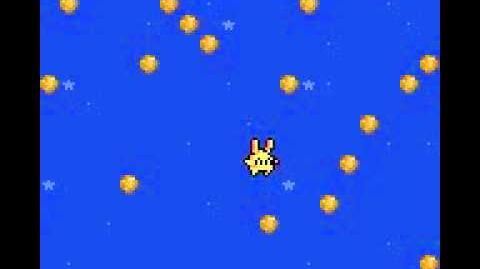