3DS
Hey! Pikmin is a 2D platformer released in 2017, developed by Arzest and published by Nintendo.

In Area 5 Sector D, one of the treasures the player can collect is a cartridge of the NES version of Balloon Fight. The treasure is called "Alien Ceremony," in reference to how Olimar mistakes the Pipes on the box art for a Podium. The game gives this description for the cartridge:

"Part of the scene depicted on this chronicle is familiar to anyone: three champions, having finished well at their chosen sport, take their places to receive their just rewards. What I don't understand is who they were or what they were competing in. They seem to have large, bulbous eyes, like some of the creatures here. Even stranger, the third prizewinner is missing for some unguessable reason..."

In the Japanese version of the game, the cartridge is instead modeled after the Famicom version. 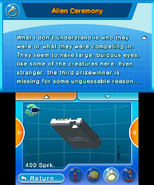 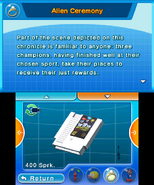