Balloon Fight GB
Buzzy Bees are enemies that fly in various patterns and will pop Alice's Balloons. They only appear in the Forest stage.

The Buzzy Bees are simply bees that fly with their stingers downward and flap their wings.

They either fly in a straight line to the right, or fly in a circle around a beehive. Their functionality seems very similar to the behavior of the small birds seen in the City and Sea B stages, as well as the bats in the Cave stage. 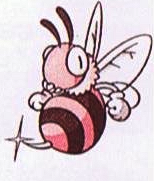