appears in Vs. Balloon Fight

appears in Balloon Fight for the NES

appears in Balloon Fight for the Game & Watch

appears in Balloon Kid and and Balloon Fight GB

appears in Balloon Trip Breeze
The Bonus Stage (Bonus Phase, Bonus Round, etc.) is a recurring element of the Balloon Fight series, appearing in a majority of the games.

In most cases, Bonus Stages are special phases set in a mostly empty room with pipes protruding out of the ground. The goal is to collect as many Balloons as you can for extra points.

The first appearance of the Bonus Stages was in Vs. Balloon Fight, where the stage is about two screens tall, like every other phase in the game. These stages appear after every third normal phase, and restore your second Balloon if you lost one. Unlike most later iterations, the layout of the pipes is randomized in this game. Twenty Balloons float out of the pipes. The points per Balloon increases each time you reach one of the Bonus Stages. If the player pops all twenty, they also get a "super bonus," which also increases each time. The last Balloon will carry an "end" card, and while the graphics exist for this in Balloon Fight on the NES as well, it goes unused.

In the NES version, the stage is only one screen tall and the pipes are much shorter than those in the original game. The pipe arrangement is also no longer randomized, though the Balloon order still is. Due to a slightly inaccurate hitbox for the Balloons, it is possible in some cases to pop a Balloon after it's already off-screen.

Bonus Stages also appear in the Balloon Fight Game & Watch, but due to the screen's limitations, there are no pipes and it simply takes place over the water with one island in the middle of the screen. Also, instead of having a set number of Balloons, there is a timer which counts down and sends you out once it reaches zero. There are many different variations of the bonus stage which are cycled through. The Balloons can either rise up out of the water, or bounce around the screen moving diagonally. Starting with the third bonus stage, sparks can appear and move either vertically, diagonally, or horizontally.

Throughout Balloon Kid, large Game Boys appear, and when you walk into them, you go to a Bonus Stage. These stages scroll vertically, and the pipes can be walked on instead of just being in the background. If a Balloon flies off screen, the player is immediately sent back to the normal level. However, a Heart will float up if all twenty normal Balloons were popped.

The Game Boys seen in Balloon Kid and Balloon Fight GB are replaced with strawberry doors in Hello Kitty World. When entered, the bonus stage is functionally similar to the ones seen in Balloon Kid, although now with large strawberry tiles filling up the space which was off-screen due to the Game Boy's limited screen size. The ceiling is also flat instead of layered, along with other minor visual differences. 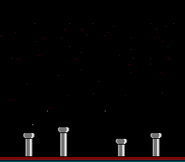 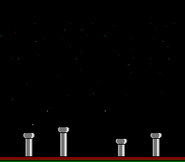 A Bonus Game Boy which leads to the Bonus Stage. 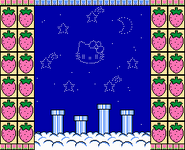