appears in Vs. Balloon Fight

appears in Balloon Fight for the NES

The Balloon Fish is an infamous enemy, appearing in most Balloon Fight games and being referenced in several other Nintendo games.

The colors and appearance of the Balloon Fish vary depending on the game and context. The in-game sprite of the fish seen in Vs. Balloon Fight and NES Balloon Fight shows it with an orange body, blue lips and fins, and pale green eyes. A similar coloration is used on the instruction card for Vs. Balloon Fight, except with white eyes.

On some advertisements for Vs. Balloon Fight and the box art of the Famicom version of Balloon Fight, the Balloon Fish instead has a dark purple body, pink fins, and white lips and eyes. This coloration would also later be seen in-game in Tingle's Balloon Fight DS and Nintendo Land: Balloon Trip Breeze.

In Vs. Balloon Fight, the fish will aggressively pursue both Balloon Fighters and Balloon Birds. If either get close to the water, it will quickly swim to the surface and follow the target horizontally. If the target gets within the range of the fish's mouth, they will be caught and dragged under, immediately either losing a life or being defeated. If something is just out of range but close enough to the water, the fish will continually try to catch it and follow it until it gets out of range.

The fish is much less aggressive in NES Balloon Fight than in Vs. Balloon Fight. Normally, it will be swimming back and forth in the middle pool of water, but if anything flies above where it is hiding, it will leap up to try and catch it. Unlike Vs. Balloon Fight, it will not move horizontally once it is out of the water. However, if it does catch something, it will drag it under the water just like in the original game. Even without the islands seen in game modes A and B, the fish will stay within that center area even in Balloon Trip mode, making the water on the left and right sides of the screen relatively safer. The fish acts largely identically in Tingle's Balloon Fight DS.

In Balloon Kid and Balloon Fight GB, the Balloon Fish is replaced by the Floppy Fish, who appears to be a smaller, round fish. It will similarly try to eat Alice or Samm if they get too close to the water, though it will leap out of the water with its mouth open instead of just swimming up to the surface. In the Cave stage, the Floppy Fish is replaced by Flicky Frog.

Similar to most enemies and non-playable characters in Nintendo Land, the Balloon Fish in Balloon Trip Breeze is mechanical. It acts similar to the NES version, though it will only move up and down in the water instead of in an arc. Once it is out of the water, it will try to bite the player, but if the player is able to avoid it, it will open its mouth again to release a Question Mark in a Giant Bubble before receding back down into the water. The Balloon Fish can be temporarily defeated in this game by running into it while having an Invincibility Star, earning the player 10 points. 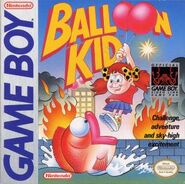 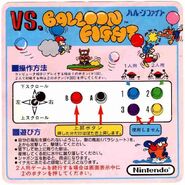