In game, both players play as the Balloon Fighter, but with different colors. The main Balloon Fighter wears a blue helmet, red overalls, a blue shirt, and blue shoes. His eyes and hair appear to be red, and he floats using red Balloons. For the second player, the colors are swapped so that red becomes blue and blue becomes red.

On some promotional material for Vs. Balloon Fight and the Famicom version's box art, he instead has a lighter blue helmet and shirt, pinker Balloons, orange overalls, and brown shoes. This color scheme is also referenced in the costume worn by the player's Mii in Balloon Trip Breeze.

In both the English and Japanese descriptions for the unlockable trophy in Super Smash Bros. Melee, it is stated that his actual name is unknown.

The trophy of the Balloon Fighter in Super Smash Bros. Melee

The intended color scheme, as seen on the Famicom box art 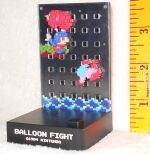 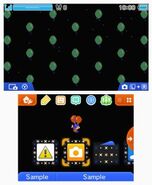 A stamp from NES Remix

A figurine of the Balloon Fighter

A keychain which features the Balloon Fighter 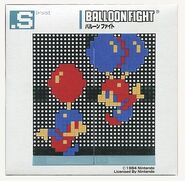 A building toy, which was Balloon Fight themed