Pops one of the player's Balloons when touched.

If the player touches a Balloon Breaker in any way, it will pop one of their Balloons and then break. However, these do not have fully solid collision like a Block or a Rest Island, allowing the player to fly past or through them if they recently took damage. If there is rain, all Balloon Breakers will become electrified. In this state, they will instantly pop both of the player's Balloons, similar to Sparks. There are also two different varieties: red and black. Their color determines whether they can be broken by a shockwave. Balloon Breakers can be safely destroyed in several ways:

There are many distinct movement patterns that Balloon Breakers can use.

Balloon Breakers are small cubes with spikes protruding out of the center of each face. The central cube can either be red or black. The spikes are either surrounded with a blue border if the cube is red, or with a red border if the cube is black. Regardless of how they move around the screen, they always rotate slowly around a slightly tilted axis.

Balloon Breakers are one of the many prizes the player can win for the Nintendo Land plaza. If the player interacts with it in the plaza, Monita will give this description:

"After closing time, the spikes retract for the safety of the park staff. Here's a helpful hint: you can actually smash the red ones. Give it a try!" 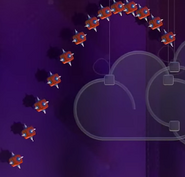